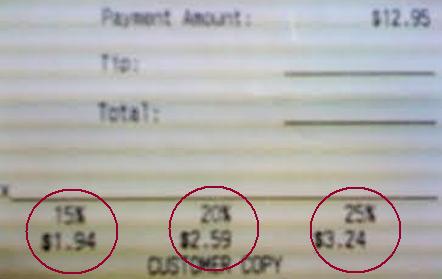 I was working at the OSU Portland Center offices yesterday and decided to lunch at the nearby Kenny & Zukes. When my credit card receipt came I encountered something new: a handy-dandy guide to help me calculate an appropriate tip. (Blurry photo provided above) Tipping after a meal is a well-known economic paradox: if you are not a regular there is no incentive to reward good service after the fact (this is the subject of one of my all-time favorite New Yorker cartoons). But in this case I was more amused about the decision to include the guide on the receipt and the particular choice of which percentages to list.

First, the decision to include the guide is an interesting one.

My guess is that people who have difficulty calculating tips will deliberately err on the side of generosity, and so it is more likely that people will tip more, not less, if they are not mathematically inclined. So putting a guide on the receipt may in fact reduce tip income all else equal.

But all is not equal. In the US 15% is considered a pretty standard tip, a default if you will. My personal default is closer to 20% because I have lived on tips before, but I am also a believer in incentives and even if it is only to help the next customer rather than me, I will signal good and bad service through my tip. So if the service is really bad, I will tip 10% – which is a generally accepted bad tip. So it is interesting that they do not calculate 10% for you, they start at 15% and go to 25%. I imagine that this serves to reset customers expectations about what a good and bad tip is. It resets the equation in your head and gives you the idea that 15% is a low tip, 20% is a average tip, and 25% is a good tip. I also imagine that it works pretty well.

So the net effect is, I would guess, an increase in the tip income of servers at K&Z. Nice.

By the way, I had already calculated my tip before I realized the little guide existed (the picture is of the customer’s copy) – my tip: $2.50.

As another aside, this is probably much more effective in Oregon where the sales tax does not provide a guide. In states with an 8% sales tax, say, doubling the tax is a pretty handy way to figure it out.