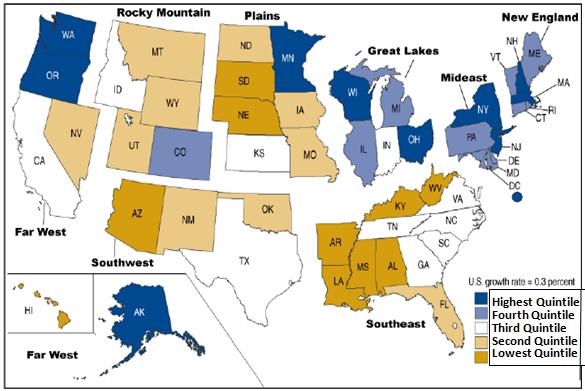 Inflation, as measured by the national price index for personal consumption expenditures, accelerated to 0.7 percent in the third quarter after rising 0.3 percent in the second quarter. This increase in the prices households paid for goods and services was greater than or equal to the personal income increases in every state except Alaska.

Nationally, the industries making the largest contributions to third-quarter earnings growth were finance and health care. Smaller contributions of the other private service-producing industries were offset by declines in goods-producing industries. Although mining, construction, and manufacturing continued to decline in the third quarter, they subtracted less from third-quarter earnings growth than from second quarter growth. Federal civilian and military earnings grew in the third quarter, but state and local earnings declined, so that the net contribution of the government sector was zero.

Quick links to all of the regional statistics underlying this news release along with mapping and charting software and a detailed methodology are available at http://www.bea.gov/regional/quick.cfm.