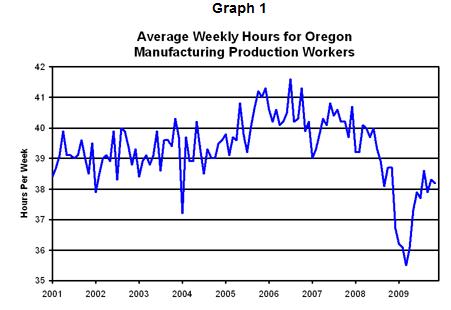 The average weekly hours worked by Oregon’s manufacturing production workers remained low in November. At 38.2 hours per week, the reading was well below the typical level of 39 to 40 hours per week seen in Oregon during 2001 through 2007 (Graph 1 above). However, the measure did rebound considerably from March (35.5 hours) through June (37.9 hours) of this year.

The two measures for manufacturing differ in terms of who they cover. The production worker figure excludes certain occupations such as managers, sales, and personnel. Also, the all employees figure includes a larger sample of employers on the monthly business survey since some firms don’t report hours for production workers.

Despite the decline in hours compared with prior years, the average wage continues to rise. In Oregon’s manufacturing sector, average hourly earnings of production workers were $17.44 in November. This is well above the comparable figures in November 2008 ($17.03) and November 2007 ($16.88) and much higher than the typical figure of about $15.50 per hour during 2004 through 2006.

Part of the reason for the increasing average pay may be due to who has been laid off in the manufacturing sector over the past two years. If lower paid workers were first to go, then the average wage rose as lower paid individuals made up a smaller share of the workforce. Another factor is inflation. Core inflation, which excludes the volatile energy and food components, has continued at a modest pace over the past few years. A difference in industry mix is partially counterbalancing the trend of elevated wages, with the higher paying durable goods sector seeing the brunt of the downsizing, while the lower paying nondurable goods industries have generally fared better.

Oregon’s financial activities industry was hit hard by the national financial crisis in the autumn of 2008. The average hourly earnings of all employees in the industry declined in 2008 relative to 2007 (Graph 2). Since then, there has been an upturn in average hourly earnings as the crisis has eased. Average pay in the industry was $25.62 per hour in November. 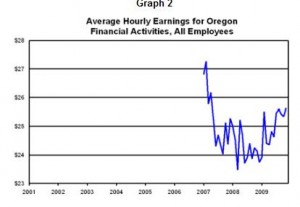