Oregon already is a leader in state income taxes, but now consider how much higher it will be if the 2001 Bush Tax Cuts will expire.
By Oregon Tax News,

Americans for Tax Reform did a calculation of what each state’s top income tax rate would be if the Bush 2001 tax cuts expire.  The results are ranked from best to worst with nine states being tied for the first spot as these states have no income tax.  Oregon was noted for being the highest income tax state (including the District of Columbia).  The method does not compare other taxes such as sales taxes where Oregon has none and Washington is among the highest. The chart is useful for those businesses and individuals consider moving into or out of a state.  More from the chart here 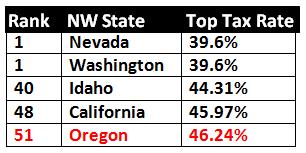