With the GDP revision today I touched up my economic forecast for 2010 and 2011.  Not much has changed, but it’s worth emphasizing the uncertainty that inventories play in the outlook.  First, here’s the picture of the new forecast: 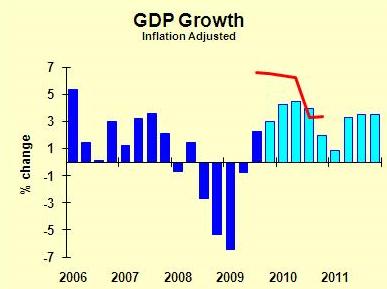 The dark blue columns are historic data points.  The light blue is my forecast.  The red line is the average performance of the economy since World War II coming out of recessions.  Note that this charts shows growth rates, so that the first quarter of 2011 is a quarter of growth, though not very strong.

The change in inventories is the greatest uncertainty regarding the timing of the recovery.  Right now inventories are well below trend: 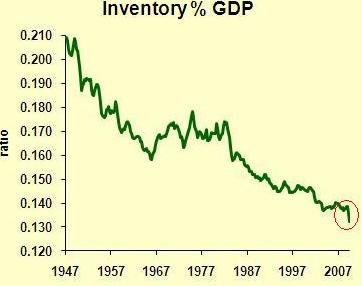 I think we’ll reverse that downtick in the circle.  Note that the downtick looks small when we chart all the time since 1947, but it had a HUGE impact on GDP.  The question is whether we’ll reverse it quickly or gradually.  I looked at the impact on GDP of a rapid adjustment, and then a very gradual adjustment: 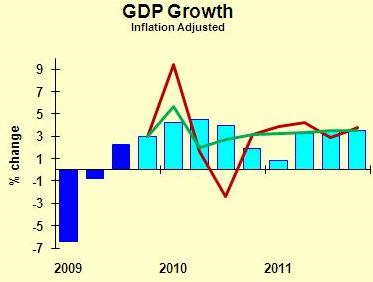 That red line is obviously the rapid readjustment.  When the inventory rebound is over, production is cut back and GDP actually declines.  Sounds absurd?  It is, but I think it has happened in the past.  The green line is just too stable to be believable.

1. When it occurs, the economy gets a shot in the arm
2. When it’s over, there’s a contractionary force on the economy.

Business Planning for the Economy: If you are planning over a four-quarter time period, it shouldn’t make too big a difference.  However, if you are focusing on a shorter time horizon, there’s a lot of uncertainty.

As I was snooping through some dusty books for insight, I came across one from the late Otto Eckstein, Harvard Professor and founder of Data Resources, Inc.  He noted that companies are uncertain about future sales, and thus about their desired inventories.  In a strong economy, they err on the upside, because they are most worried about lost sales, and a little extra inventory won’t hang around too long.  In a weak economy, they err on the downside, because cash is precious, and extra inventories may stick to the company’s ribs.  We have clearly seen companies erring on the downside.  Once their attitudes change, look for a surge of erring on the upside.
Bill Conerly is principal of Conerly Consulting LLC, chief economist of abcInvesting.com, and was previously Senior Vice President at First Interstate Bank. Bill Conerly writes up-to-date comments on the economy on his blog called “Businomics” and produces a monthly audio magazine available on CD. Conerly is author of “Businomics™: From the Headlines to Your Bottom Line: How to Profit in Any Economic Cycle”, which connects the dots between the economic news and business decisions.