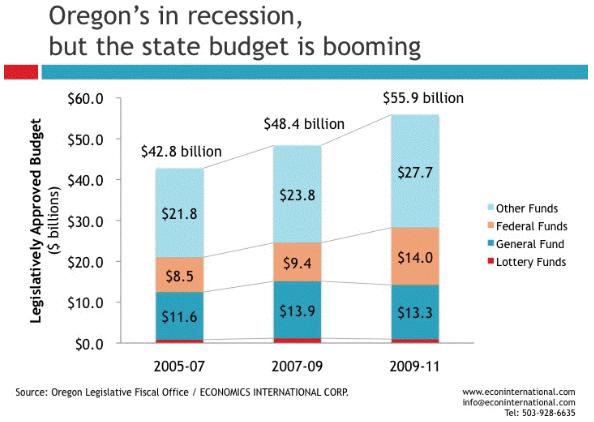 Oregonâ€™s legislators are quick to complain that they had to find $2 billion in state budget cuts in the last legislative session. TheseÂ  complaints are a bit disingenuous when, in fact, as the figure above shows, the legislatively approved budget has increased by $7.6 billion since the last budget.

Whenever one writes about state budgets, the more wonkish among us will argue that â€śtotalâ€ť state spending is the wrong number to look at. They argue that much of the funding and spending sits in dedicated accounts and that the Legislature has no discretion over much of the stateâ€™s spending.

This is what is known as the â€ścolors of moneyâ€ť argument: Every dollar has a colorâ€”blue dollars can only be spent on roads, red dollars can only be spent on health services, green dollars are in the general fund, and so on. It is said that the colors cannot be mixed and the rules cannot be changed. But they can and the Legislature can change them. 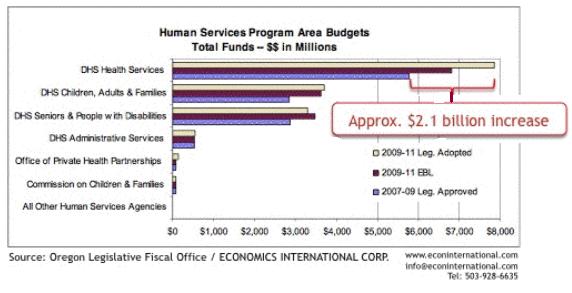 Over the next four years, the program will impose $1.2 billion in new and increased taxes on hospitals and health insuranceâ€”taxes that will be passed down to taxpayer/consumers. Oregon hopes that the Federal government will match Oregonâ€™s increased spending so that new and expanded programs would spend at least $2.8 billion over the next four years. [This is what is known as the “Coupon Fallacy,” which is a topic for a future post.]

The Legislature, however, has painted all this money with its own color. In this way, politicians can complain about spending fewer green dollars while spending more red dollars and increasing total state spending.