Sales activity continued to outpace levels from the same month last year in the latest RMLS™ Market Action report. Inventory was also down in several areas, including Lane County, Portland and Clark County.

Both pending and closed sales increased in 9 out of 10 of the regions that we cover when compared to the same month in 2008. The Portland metro area saw its largest increase in closed sales since January 2005, which was also the highest total of closed sales since August 2007. Clark County set a record for pending sales, with an increase of 56.9% compared to last October. Here’s a recap of each region’s same-month sales activity: 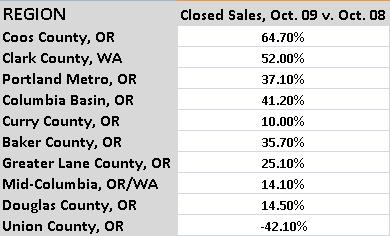 It will be interesting to see if this trend of increased sales activity will continue this fall and winter season. The percentage increases were not surprising this month, given the recent strength in sales and considering that last year we saw sales begin to drop in October, kicking off a stretch of slow sales activity that would extend into the first quarter of 2009.

Inventory levels have often increased as we head into the slower fall and winter seasons. But, considering the following factors, it’s no surprise:
• Low interest rates
• New listings continue to drop, reducing the supply of homes available
• The perceived tax credit deadline (which has since been extended)
• Lower home prices

What do you think?  Where do you see the market heading?