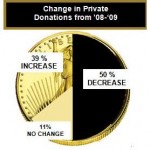 Challenged by the recession, survey results show that nonprofits must take steps to contain costs and continue to serve their communities. In 2009, private donations have decreased by 50% while the demand for services has increased 12%.

The Oregon Community Foundation (OCF) surveyed  208 Oregon nonprofit organizations about the impact of the economic recession on donations, demand for services, and cost-saving measures. 134 nonprofits completed the survey. The survey results showed:
• Oregonians who are able to give are doing so…more donors are giving smaller amounts.
• Donors have shifted support to different organizations in these hard economic times.
For example, education donations are seeing less of a decline than the arts.
• Most nonprofit organizations are under some degree of fiscal stress.
• Some nonprofit organizations have been able to increase contributions despite the recession.
• Large statewide nonprofits and Portland Metro organizations with large operating budgets have been among those most affected by the recession
• Demand for services has increased with the largest demand in education and social services

Despite the recession, some nonprofit organizations did increase contributions in 2009. In large part it was due to taking prompt action to balance organizational budgets while continuing to provide services. The Oregon Community Foundation saw this as the type of leadership thay may be the model others nonprofits will need to follow in order to help survive a poor economy.

78% of survey respondents have implemented cost-saving measures. Specifically, 30% have eliminated programs or services and 31% have laid off staff. Anecdotal comments suggest that some organizations are balancing the need to reduce expenses with the need to continue to provide services to the community.

Some nonprofits see the recession as an opportunity to communicate with current and potential donors and to plan for future fundraising. Overall, the majority do not intend to make any further budget adjustments for 2010.