This recession has shaken people up, but what will be the lasting effects on consumer behavior?  That’s one of the key questions as we look forward at the nature of the recovery.  I’ve been arguing for a “return to normalcy,” in which people will abandon the exuberance of the boom, but without going overboard into miserliness.  However, some folks are looking for a return to Great Depression-born attitudes toward thrift.  So let’s look at the savings rate in the Great Depression and afterward. 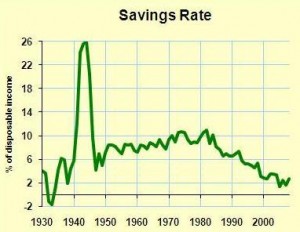 The Great Depression: The savings rate was fairly low.  With incomes down, people couldn’t afford the luxury of saving.

World War II: High savings rate due to rationing and price controls (goods were not available for purchase), which continued through mid-1946.

1980s, 90s and 2000s: Declining savings rate.  Why?  Perhaps a more reliable social safety net reduced the need for savings, perhaps social attitudes toward near-term satisfaction versus long-term risk were changing.  However, it certainly was not demographic change.  The baby boomers were advancing into their high-earning years, which are typically high savings years, so the savings rate should have risen, if nothing else were changing.  Also, the officially calculated savings rate undercounts investment income, thereby underestimating savings.  (It’s complicated; more details here.)  Some argued that our savings rate got so low because people assumed that their home appreciation would do their savings for them.  However, the savings rate declined steadily through the 1990s, when home price appreciation averaged only three percent per year.

The Great Recession: The chart above with annual data through 2008 doesn’t show recent changes very well.  Here’s a picture with quarterly data through the third quarter of 2009: 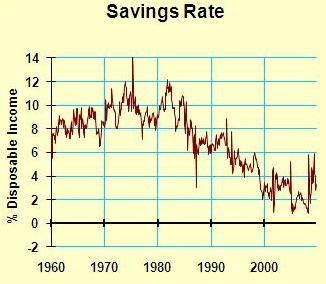 You can see the savings rate has jumped recently.  (The data are jittery because of the 2008 stimulus payments and the recent Cash-for-Clunkers program. Also note that quarterly data are only available back through 1959.)  This is really the key to our recession: consumers got scared and stopped spending.

The Future of Consumer Saving and Spending: I think consumers may well return to a higher savings rate.  However, I don’t see any justification for them moving their savings rate up any faster than they moved it down.  Aside from the World War II, experience, sharp moves tend not to last.  The big changes are gradual.  So let’s suppose that consumers want to get back to an eight percent savings rate.  What does that mean for actual savings?  From 1982 through 2005, the savings rate dropped by eight percentage points over 23 years, or about 0.35 percentage points per year.  That means that consumer spending would, in the future, grow by about 0.35 percentage points slower than incomes.  We could well expect the average gain in disposable income in the coming years to be about five percent, so look for spending growth of maybe 4.65 percent.

The big lesson: consumers can raise their savings rate without going into a bunker mentality.  They’ll still grow their spending, just at a slightly slower pace.  That’s positive for the economic outlook, because we need consumer demand in the near term to help the economy get going.

As I’ve noted before, companies selling to consumers (or in the consumer goods supply chain) should monitor their sales very closely, not only in the aggregate but also by price point.