The mood of Oregon voters is pessimistic but has improved significantly in the past eight months. In February of this year, we reported pessimism at its highest point in six years, but today we find the Oregon electorate on a much more even keel. At the same time, however, Oregonians are not overwhelmed by the Obama health care proposal being debated in Congress right now. Following are the details. 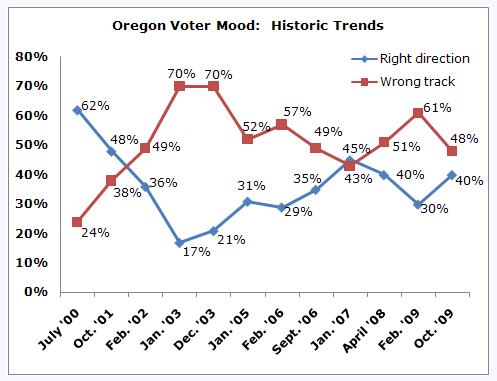 Historically, voter “mood” is directly correlated with the state of the economy – in good times, optimism soars, and in bad economic times, we see hopes fade. Our most recent survey shows an electorate seemingly “on the mend” compared to our last measurement in February of this year. Today, 40% of Oregonians say things in the state are generally headed in the right direction, and 48% say things are off on the wrong track. By comparison, in February, fully 61% of Oregonians said things in the state were generally off on the “wrong track,” while only 30% said things were headed in the right direction. Surprisingly though, as bad as the recent recession has been, the 61% “wrong track” measurement earlier this year is still not as high as the 70% we saw in 2003.

The Dow’s recent gains and perceptions of a more stable economic climate in the past several weeks are likely a major contributor to the improved mood here in Oregon, as well as at the national level. An average of recent public polls show the national mood at 39% right direction, 54% wrong track (RealClearPolitics).

Voter “mood” can be an indicator of election outcome. Incumbent officeholders typically fare better when people believe things are headed in the right direction, but are more vulnerable when the majority believes things are off on the wrong track. If pessimism in Oregon continues, this could benefit Republicans in the 2010 election cycle.

Looking at mood by subgroup, Multnomah County voters are optimistic today by a 12-point margin (49% right direction, 37% wrong track), while voters in Clackamas and Washington Counties and the rest of the Willamette Valley have mixed feelings about the direction of the state, and pessimism prevails among the majority of voters residing elsewhere in the state. There is also a gender gap with regard to mood – men are pessimistic, but women are divided, and by age, voters age 18-34 are cautiously optimistic, but pessimism prevails among voters age 35 and older. Predictably, by party we find Republicans widely pessimistic (which is typical of the out of power party), while Democrats are optimistic, and the mood among Independents today is marginally negative. 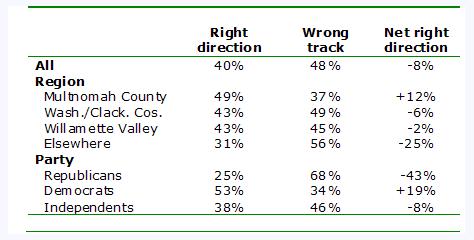 Obama Care: Oregonians are Not Totally On Board

Today, Obama’s health care plan meets with mixed reactions from Oregon voters – 42% support the plan, 37% are opposed and 21% are unsure. It is interesting to note that the level of “intensity” in this debate is similar on both sides of the issue – 26% “strongly” support the President’s plan, while 30% “strongly” oppose it. Nationally, recent public data show the national electorate opposing Obama’s current proposal, 44% to 52% (Pollster.com; average sentiment from five recently published national polls). 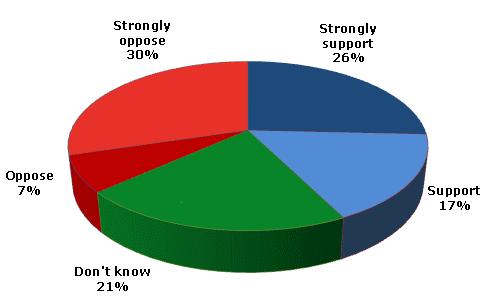 Among Oregonians, the President’s health care plan finds its widest margins of support among Democrats (64% support, 16% oppose), but Republicans are opposed by a similar margin (14% support, 69% oppose) and Independents are only marginally supportive today (41% support, 33% oppose). Women of all ages are marginally on board with the President’s plan, and while men age 18-54 share this sentiment, a plurality of older men are opposed to the plan today. Regionally, Multnomah County voters support the plan in majority numbers, but sentiment in Washington and Clackamas Counties and the Willamette Valley is divided, and a plurality of voters elsewhere in the state are opposed.

Please feel free to call or email with any questions.