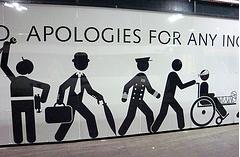 A simple apology saved a business millions and satisfied customer complaints.  New studies show businesses can improve customer relations without dropping a rebate check in the mail.  Researchers at Britain’s Nottingham School of Economics tracked 632 customer complaints posted on a German eBay site.  In an attempt to correct problems, half of the disgruntled customers received an apology while half received cash rebates ranging from $3 to $8.  Forty-five percent of the customers who received an apology removed their critical ratings, compared to 21% of those who received a cash apology.

Hospitals have also found that owning up to medical errors can reduce litigation and prevent future mishaps.  When 18-month-old Kaelyn Sosa suffered a bump on her head, her mother took her to the emergency room at Baptist Children’s Hospital in Miami to make sure her injury was not serious.  While Kaelyn was under sedation in an MRI machine, her breathing tube was dislodged, cutting off her oxygen and causing a crippling brain injury.  After the accident the hospital settled.  However, the hospital took further measures to prevent a recurrence.  Ozzie Sosa, Kaelyn’s father, said the hospital’s dedication to solving the problems that contributed to his daughter’s injury helped the family get to know the staff and forgive them for the unintentional mistake.

According to the Institute of Medicine, medical mistakes kill as many as 98,000 Americans each year.  Yet, medical centers are finding that apologies help minimize litigation.  The University of Illinois Medical Center has 40% fewer law suits since it implemented a policy to communicate with patients and families immediately after an accident occurs, apologizing, disclosing medical errors, and offering a financial settlement.

Today’s businesses and medical facilities are finding that an apology may not entirely solve a problem, but it will allow individuals to move on and forgive mistakes without requiring economic remedy.