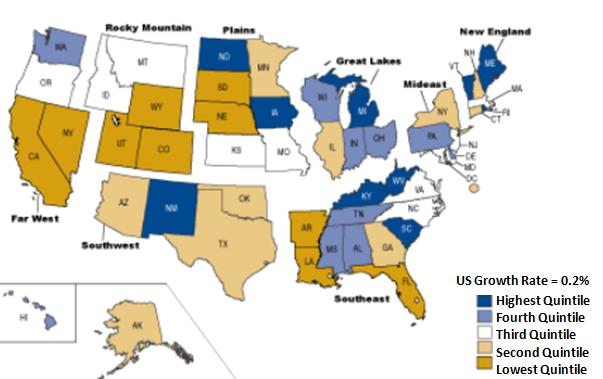 U.S. personal income growth was offset by inflation, as measured by the national price index for personal consumption expenditures, which rose 0.3 percent in the second quarter after falling 0.4 percent in the first quarter.

Personal income increased in the second quarter in 36 states after falling in all states except Maryland in the first quarter. The percent change in second quarter personal income ranged from 1.5 percent in North Dakota (where the farm sector accounted for a large portion of growth) to -1.0 percent in Wyoming (with large losses in mining).

The personal income increase in every state except North Dakota can be attributed to growth in transfer receipts. The other components of personal income-net earnings and property income-declined in every state except North Dakota where net earnings grew 0.9 percent and Iowa where net earnings was unchanged. Second quarter transfer receipts were boosted by the American Recovery and Re-Investment Act (ARRA) of 2009 and by rising unemployment benefits. ARRA payments for OASDI, SSI and food stamps were $60 billion in the second quarter, State UI benefits increased $44 billion, and all other transfers increased $49 billion.

Earnings growth in the second quarter was in the government, health care, and farming industries; earnings declined (or was unchanged) in the other 19 industries BEA tracks quarterly with particularly large losses ($48 billion) in construction and manufacturing. Declines in mining (including oil and gas extraction) earnings accounted for relatively large portions of total earnings declines in Wyoming, Alaska, Oklahoma, Louisiana, and West Virginia.

The annual estimates (1969-2008) and quarterly estimates (1969:I-2009:I) of state personal income have been revised to incorporate the comprehensive revision of the National Income and Product Accounts (NIPA). Comprehensive revisions, which are undertaken every 4 to 5 years, are an important part of BEA’s regular process for improving and modernizing its accounts to keep pace with the ever-changing U.S. economy. Such revisions differ from annual revisions because of the scope of the changes and because of the number of years subject to revision. Comprehensive revisions consist of: (1) changes in definitions and classifications that update the accounts to portray more accurately the evolving U.S. economy, (2) statistical changes that introduce new and improved methodologies and incorporate newly available and revised source data, and (3) presentational changes that make the accounts more informative and easier to use and that reflect the definitional, classification, and statistical changes.

The major definitional change that affects state personal income is the new treatment of disasters to better reflect the distinctions between current and capital transactions and to bring the NIPA in line with recommendations of the System of National Accounts (SNA) 2008. This raises total personal income in some states and years affected by major disasters such as Hurricane Katrina in 2005 and the terrorist attacks of September 11, 2001.

Two major methodological improvements were made. The first is an improvement in the measurement of wage and salary disbursements. The Quarterly Census of Employment and Wages, which BEA uses to estimate wage and salary disbursements, does not include employee contributions to cafeteria plans in 28 states where state law excludes these contributions from wages for unemployment insurance purposes. These contributions were estimated using state data from the Medical Expenditure Panel Survey of the Agency for Healthcare Research and Quality.

The second is an improvement in the estimation of employer contributions for Old-Age, Survivors, and Disability Insurance (OASDI) by industry. Previously, a national estimate of private employer OASDI contributions was allocated to industries in proportion to wage and salary disbursements, overstating contributions in high-wage industries. The methodological improvement uses data on the distribution of employment by wage rates, states, and industries from the Occupational Employment Survey of the Bureau of Labor Statistics and maximum taxable earnings from the Social Security Administration.

Newly available and revised source data used in the revision of state personal income include: U.S. Department of Agriculture farm income, expenses, and employment statistics from the Census of Agriculture and Bureau of Labor Statistics tabulations of wages and salaries for the first quarter 2009.

The major presentational changes for the state personal income statistics include a new table, SA40, with a breakdown of property income into separate estimates of dividends, interest, and rent and the addition of charts and graphs to BEARFACTS (forthcoming).

BEA’s national, international, regional, and industry estimates; the Survey of Current Business; and BEA news releases are available without charge on BEA’s Web site at www.bea.gov. By visiting the site, you can also subscribe to receive free e-mail summaries of BEA releases and announcements.