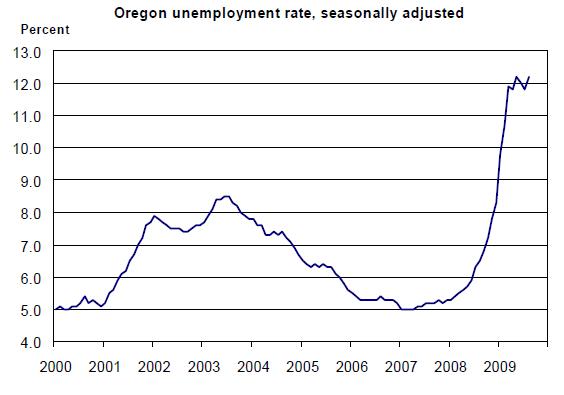 Industry Payroll Employment (Establishment Survey Data)
In August, four major industries posted seasonally adjusted job losses: leisure and hospitality ( 2,300), government (-2,000), professional and business services (-800 jobs), and educational and health services (-800). None of the other major industries posted significant changes.
While seasonally adjusted nonfarm payroll employment dropped sharply in August, by 6,600, there was positive news in the goods producing sector. The long-term slide in employment in both construction and manufacturing at least temporarily halted. Both of these two major industries performed roughly in line with their normal seasonal pattern. And the revisions to these two industries for July data show that the originally reported losses in July were not as substantial as initially estimated.

Leisure and hospitality saw the peak employment month of the year come in under 173,000 compared with 181,700 in August 2008. The most recent monthly tally was down from the July figure by 1,000. Arts, entertainment, and recreation was hit with a loss of 1,100 in August. Elsewhere in the broader industry, full-service restaurants cut 400 jobs in August and is now down 5,100 jobs or nearly 8 percent over the year. Underscoring the notion of consumers eschewing luxury goods in favor of cost-conscious alternatives, limited-service eating places added 1,000  jobs in August and now is down only 500 jobs, or less than 1 percent, since August 2008.

Government cut 3,500 jobs at a time of year when a loss of 1,500 is the normal seasonal pattern. Federal government cut 300 jobs, but is still up 600 from its year-ago figure. State government was essentially unchanged over the month and over the year. Local government, then, has been the main driver of government’s recent trends.

Indian tribal employment was 8,500 in August, which was 700 below its year-ago figure. The tribal casinos, restaurants, and accommodations are feeling the effects of the recession.
Professional and business services has shown a downward trend over the past 12 months, shedding more than 17,000 jobs or nearly 9 percent in that time. After a flat trend in the spring, by August, the decline resumed, with a loss of 800 jobs on a seasonally adjusted basis.

Educational and health services posted a rare seasonally adjusted job loss in August, cutting 400 jobs at a time of year when a gain of 400 is the norm. Longer term, the industry is still on the uptrend, having added 5,600 jobs or 2.6 percent to its workforce over the past 12 months. Two component industries have held back health care recently. Ambulatory health care services is down 800 jobs since August 2008, while social assistance is down 900 over that time.

Apart from the drop in the employed and the sharp increase in the number of unemployed, the labor force has shown a trend not seen in more than a decade. During July 2008 through April 2009, Oregon’s seasonally adjusted labor force grew very rapidly, increasing by more than 52,000 individuals or 2.7 percent. Then from April through August this measure of the labor force declined by more than 36,000 people, putting the labor force just slightly above its August 2008 total. Reasons for the declines in Oregon’s labor force over the past four months are unclear at this time.

For the complete version of the news release, including tables and graphs, visit: www.QualityInfo.org/pressrelease.
For help finding jobs and training resources, visit one of the state’s WorkSource Oregon Centers or go to: www.WorkSourceOregon.org.
Equal Opportunity program — auxiliary aids and services available upon request to individuals with disabilities.