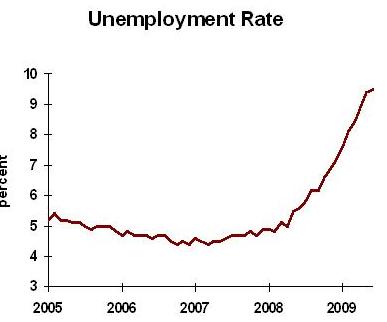 It turns out that the economy has some self-correcting features in it.  Also, policy may help extract us from recession.  The self-correcting features include–believe it or not–consumer spending.  The drop in consumer spending has been disproportionate to the decline in incomes.  That is, most of the drop was due to employed people who were scared, rather than unemployed people.  When the employed people realize that they have dodged the bullet, they start spending.  So the key factor isn’t so much the behavior of people out of work, but the behavior of those who still have their jobs.

One other self-equilibrating factor will not be at work this recovery.  In recessions, interest rates typically fall, stimulating new housing construction.  However, our excess housing inventory will prevent that from working this time round.

One last comment on unemployment:  look carefully at the historic pattern and you’ll see that the unemployment rate is a lagging indicator, meaning that it starts to improve after the overall economy is already improving.  As such, it does not prevent the economy from improving.

There are plenty of things to worry about.  The high unemployment rate preventing a recovery is not one of those things.