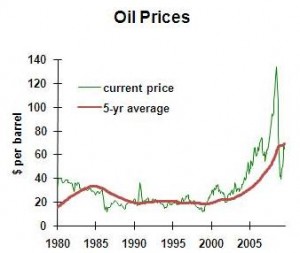 The argument for higher oil prices in 2010:  in the short run, supply is inelastic, meaning that higher demand, leading to higher prices, cannot bring much new production on line any time soon.  That is absolutely true, but it’s only half the story.

The argument for lower oil prices in 2010:  in the long run, supply is very elastic, meaning that higher prices eventually stimulate a great deal of new supply.

Here’s the price chart, to which I’ve added the five year moving average:

I used the five year average because five years is a rough estimate of the average time it takes to bring new supply on line.  Oil company executives do not move with a hair trigger when oil prices rise, because it’s too easy for one month’s high price to become the next month’s low price.  Rather, investment in oil exploration and development occurs after a sustained period of higher prices.
And just last month we hit the highest five-year average oil price level ever!

That leads me to expect further supply increases in the coming years, which gives good basis for an optimistic (for consumers) oil price forecast for 2010.

Business planning implication: Don’t take it for granted that we’ll have higher oil prices in 2010, but oil is so hard to predict that neither would I recommend a business plan based on lower prices.  Be ready to go in either direction.