Yesterday I said that the hard evidence for the recession being over was a little soft, with only three of the four main coincident indicators turning up.  Today’s announcement of industrial production gives us a second indicator that has turned up, at least for one month.  Here’s how it looks: 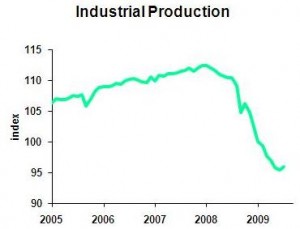 A couple of other pieces of good news:  Germany and France reported growth in the second quarter, and the Survey of Professional Forecasters has turned more optimistic.  This is the same shift that the Wall Street Journal reported from its forecast panel.  I’ve always said that the consensus forecast was important to look at both for the forecast itself, and for the direction of forecast revision.  This strong upward revision in the forecast is very good news.