On July 31st, Defend Oregon placed a full-page ad in the Portland Business Journal in support of the two tax increases increases (Corporate minimum and higher income earners) passed by the Oregon Legislature.  The message was straight to the business community with the headlines that read “We can save our schools, protect the vulnerable, and still have the lowest corporate taxes in the West.”  The ad is in response to a referendum drive launched to stop the tax increases.

The referendum supporters called Oregonians Against Job Killing Taxes, have now started a television ad that is seen on CNN, MSNBC and Fox. Here is their ad. 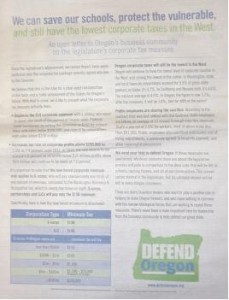