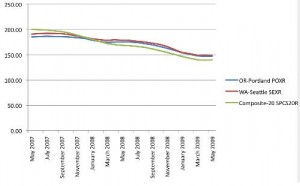 Portland home values, according to the Case-Shiller index, ticked up slightly in May compared to April (a 0.1% gain). This is not unusual, as the seasonal pattern of home values has, for the last two years and in the midst of the general erosion in home values, seen slight improvement in the May and June months. Still, it is better than continued decline. That said, the decline in home values from last May (2008) is over 16%, whereas the change from May ’07 to May ’08 was only a little over 5%, so the overall trend has been accelerated erosion in home values.

Have we hit bottom? Probably not. There are lots of distressed properties out there not yet on the market and lots of distressed families as evidenced by the high unemployment rate. Still, news that sales have picked up is encouraging, it at least shows that the combination of low interest rates and good deals in the housing market are driving activity. But we are a long way from the end in my opinion. I think the precipitous decline in home values is over, but it will be a while before we see any real appreciation.

For a nice look at home values and trends by metro area, the Wall Street Journal has an interactive chart. In general, as they have for a while, Portland and Seattle fall somewhere in the middle: not as bad as places like Phoenix, Las Vegas, San Francisco, Miami and Detroit, but worse than places like Dallas, Denver, Cleveland and Boston.