I’ll be updating my economic forecast in early August, taking a little longer than usual because of a major revision in the GDP statistics and their underlying components.  (Data wonks read this.)  However, it’s never too soon to think about the strengths and weaknesses of the recovery.  Before getting into that, though, let’s look at a chart that comes courtesy of David Altig of Macroblog: 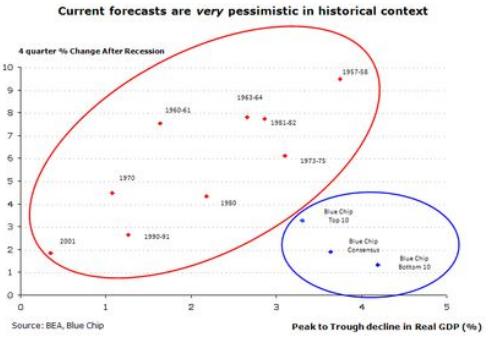 Look at how this historical data tend to fit along an upward-sloping trend.  Because the two axes use different scales, it may not be apparent that the line of best fit is pretty steep.  By eyeball, recessions with a two percentage point drop in GDP are usually followed by a six percent gain in GDP.

For the record, my current (meaning old) forecast has 2.8% growth of GDP in the four quarters that begin the recovery, so I’m more optimistic than average, but less optimistic than the 10 biggest optimists.  I’m also more pessimistic than historic average experience.

Now let’s do the conceptual tally:

Factors leading to an economic recovery:

The high savings rate has put money into consumers’ pockets
Monetary stimulus has been very strong
Inventories will swing from negative to positive forces
The weak sectors, such as housing construction, can’t get much worse

Factors that will limit the strength of the recovery:

The residential construction sector will not rebound, because of excess supply
Consumers will be moderate in their spending rebound
Credit limitations will limit some business and consumer spending
Uncertainty about government policy will trigger delays in spending decisions

How will tax hikes and the deficit affect the economy?

Tax hikes will have negative effects in the short run, but my reading of economic history is that they do not trash the economy in the short run.  They will limit our growth by a bit, which will accumulate like compound interest (but with a negative effect rather than a positive effect) over time.  I don’t expect the deficit per se to have a big effect, except that it will trigger tax increases.

Will inflation accelerate in 2010?

There will certainly be some inflation acceleration in my economic forecast, but nothing like the early 1980s.  That’s because I think the Federal Reserve will begin tightening next year.  But keep your fingers crossed.

Question for readers:  What other items should I report to you when I complete my forecast?  Leave a comment.