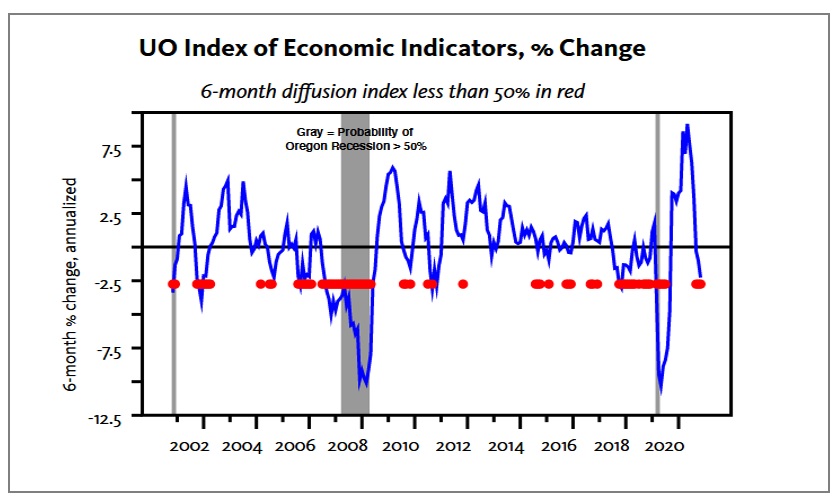 On net, in November the Oregon economy continued to make up for ground lost during the pandemic. Details include:

– The Oregon Measure of Economic Activity rose to 0.38 while the moving average measure, which smooths out the monthly volatility, remained at an essentially neutral value of 0.1 (where 0.0 is the average pace of growth since 1990), the same as October’s value.
– Only the manufacturing sector made a negative contribution to the measure, and even that was essentially neutral at 0.03. Labor market components generally made stronger contributions, especially employment in the manufacturing, construction, and employment services sectors.
– The University of Oregon Index of Economic Indicators was flat in November while the prior month’s gain was revised down to 0.2%.
– Like in October, the UO Index received support from a solid rise in employment services payrolls, mostly temporary help employment, and a sharp drop in initial unemployment claims. Both moves are consistent with a strong labor market.
– Housing units permitted, the weight distance tax (a measure of trucking activity, smoothed), average hours worked in manufacturing, and new orders for core manufactured capital (an indicator of business expansion activity) all made modest declines.
– Consumer sentiment dropped sharply again, likely reflecting higher prices and unhappiness over the ongoing pandemic. Still, political identification is driving the data in recent months, and it is important to note that consumer spending has remained strong.

It is normal for the UO Index to move sideways after a period of rapid gains. As such the recent pattern does not signal a fundamental shift in the outlook. The expansion is likely to continue for the foreseeable future.