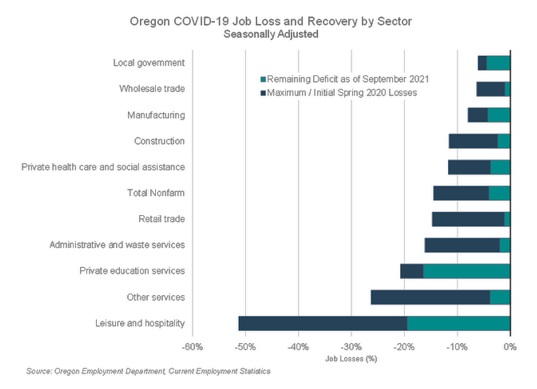 This morning the Employment Department released the September unemployment rate and jobs numbers for Oregon. After averaging monthly gains of 10,200 jobs from January through August, nonfarm payrolls lost 200 jobs in September.

The jobs recovery looks quite different across different areas of the economy. About half of local government payroll jobs are in public K-12 schools and higher education. In September, local government fell short of its typical hiring level by 3,700 jobs. Local government has struggled to regain jobs since the pandemic recession, only adding back about 26% of the jobs lost in spring 2020.

The hotels, restaurants, bars, and entertainment places in Oregon’s leisure and hospitality sector have also struggled to get back to pre-pandemic job levels. They’ve been hiring at a good pace, with an average of 3,500 in monthly job gains so far in 2021. Leisure and hospitality has regained 62% of the jobs lost in spring 2020. The tremendous size of the task of adding back the 111,000 jobs lost last spring remains a challenge though — especially during a time of record job openings and employer competition for workers.

Some industries have fully recovered and now expanded beyond their February 2020 job levels. Professional and technical services added 1,200 jobs in September. These companies, which provide a mix of architectural, engineering, computer design, and other services, had 6,000 more jobs in September than they did before the recession.

Transportation, warehousing, and utilities employment surged during 2020, which was a stark contrast to most of the rest of Oregon’s economy. The sector added 1,000 jobs in September, and has 3,900 more jobs than it did before the recession. As of September, the banks, insurance, real estate and rental companies that make up the financial activities sector had also regained 99% of the jobs lost in spring 2020. 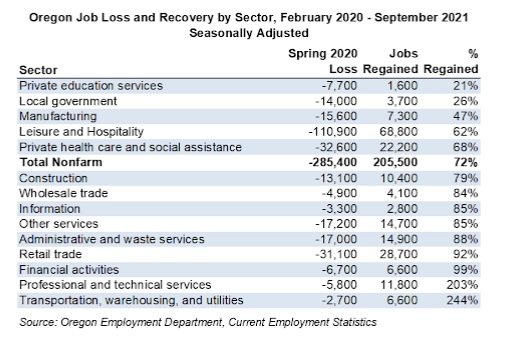 Despite the pause in overall job gains, Oregon’s unemployment rate continued to improve. The rate was 4.7% in September, a significant decline from 5.0% in August. More information about Oregon’s employment situation can be found in the full news release [3].