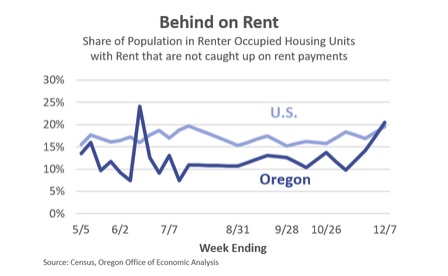 Recently, I was on OPB’s Think Out Loud. Among other things we discussed how many households are doing decent to well this year, even as our lower-income neighbors are struggling with dim job prospects until the pandemic is over. I made a statement along the lines that due to the federal CARES Act lower-income households have largely done OK through Halloween but have seen things deteriorate since. I wanted to expand on that for a moment.

First, due to the one-time recovery rebates and expanded unemployment insurance benefits, incomes rose noticeably during the early stages of the pandemic. Households across the income distribution saved much of those gains. However lower- and moderate-income households have begun drawing down that savings in the past couple of months. Recent research from JP Morgan Chase finds that this draw down in percentage terms is largest for the bottom quartile of families. At the end of October, those in the lowest income quartile still had median checking account balances about $200 higher than last year, but that increase had been shrinking since earlier in the summer. Their analysis stops at the end of October.

Since then, available data on rent payments shows some deterioration. Nationally, the NMHC rent tracker fell slightly in November but on-time payments in in early December declined noticeably from year-ago figures. Some of these may be made up with late payments throughout the month, but that is not yet known. Overall this pattern can be seen locally based on the Census Bureau’s Household Pulse Survey [3]. A rising share of Oregon renters are reporting being behind on rent in recent weeks, after holding steady from mid-May through mid-November.

The latest survey data also shows that Oregon renters are becoming more worried about their ability to pay next month’s rent and the possibility of eviction. Now, the share of renters reporting they are very likely to be evicted in the next two months, or have no confidence in their ability to pay next month’s rent remain within the range of previous surveys. The big rise in recent weeks are among those worried about such possibilities. 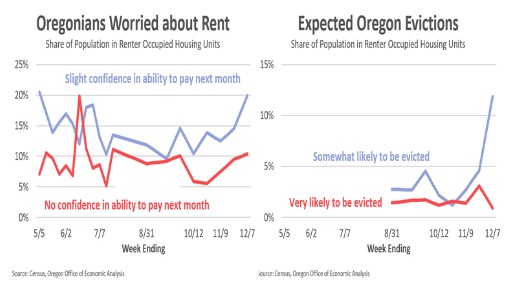 All told the various data points paint a consistent story of lower-income households beginning to fall behind in the past month or two. The federal CARES Act boosted incomes and savings through the summer. Effectively this cushion lasted into November, but given the rise in delinquent rent payments so far in December, it appears to be largely gone today. The outlook for such households remains weak until the pandemic is over. Only then will job opportunities return.

The best news is that after months of inaction and stalemate, the federal government appears on the verge of passing another relief bill. Reports indicate it will include both another round of recovery rebates and expanded unemployment insurance, albeit at reduced levels compared to the CARES Act. Should such a bill pass, it will go a long way to improving the finances of low-income households for the next couple of months. At that time the pandemic will have hopefully waned and the recovery will be in full swing.

Finally, I would note that from a big picture perspective, the distinction between micro and macro trends is important. It can be true that both overall household finances remain in good shape, setting the stage for strong growth near year, and our lower-income neighbors and friends need additional assistance to avoid falling further behind given their immediate job prospects are meager at best.