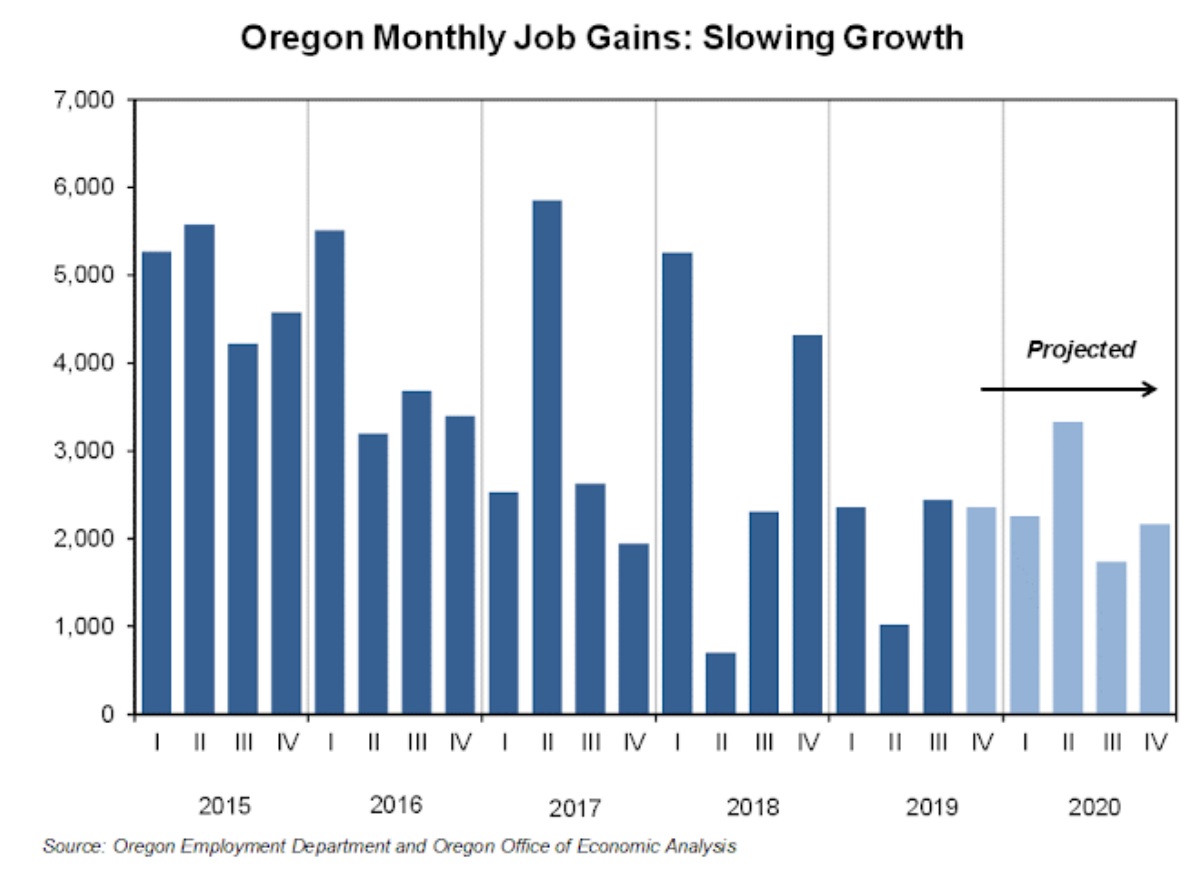 Entering its eleventh year, the U.S. economic expansion is now the longest in recorded history. Growth slowed in 2019, and the burning question is why? Economic weakness – foretelling a recession – or simply what one might expect in such a mature expansion?

The answer likely lies somewhere in between. Business investment has been weak to nonexistent over the past year. The trade war, tariffs, slowing global growth, and the political climate have hurt sales and created an atmosphere of uncertainty. On the other hand, incomes are rising, inflation is low, and consumer spending is strong. In addition, the economy is at, or near, full employment, which also explains the subdued job growth.

The bottom line is that the U.S. economy remains in expansion mode and while the slowdown in business spending is cause for concern, it does not necessarily portend an imminent recession.

Like the nation, Oregon continues to add jobs at a slower pace as our economy transitions from the peak rates of a few years ago to a more sustainable pace today. Oregon’s slowdown points more to labor supply constraints than to economic weakness, according to the latest forecast [3] from the Office of Economic Analysis (OEA). Employers have a dwindling pool to draw from when trying to fill jobs, thus dampening what might have been more robust job creation.

Meanwhile income is rising. In 2018, Oregon’s median household income grew faster than every state except Idaho. After decades of lagging the nation, OEA points out that the typical Oregonian’s household income is now 2.4 percent higher than their national counterparts.

The public sector will outperform its recent past across most components: Local government will grow as revenues continue to improve in step with the economy, and the federal component will benefit from Census hiring. Private education and health services also accelerates, primarily the healthcare component as our population continues to grow and age. Professional and business services rebounds from its recent slump and adds more jobs than all other broad industries.

OEA expects several industries to slow or lose jobs in 2020. The manufacturing sector turns negative, weighed down by trade issues, global risks, and the announced closure of two NORPAC food processing plants. Construction also decelerates even as the housing rebound continues; growth rates topping 8 percent in recent years are simply unsustainable. The trade, transportation, and utilities sector settles down after the Amazon surge of the past few years, which saw thousands of jobs created in the warehousing component.

While growth should continue in 2020, the next recession is a matter of when, not if. Outside of unforeseen financial or geopolitical shocks, it is unlikely to happen within the next year.