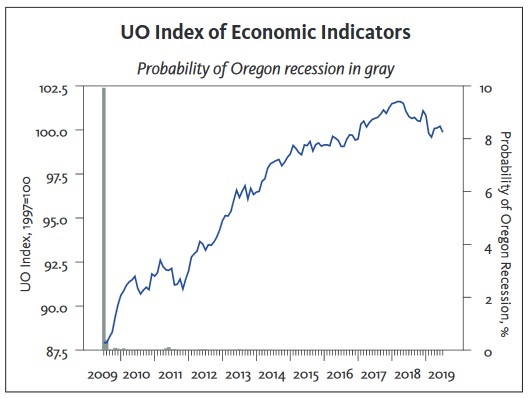 This is the University of Oregon State of Oregon Economic Indicators for July 2019.

The Oregon Measure of Economic Activity rose to 0.41 in July although previous months were revised downward. Highlights of this month’s report include:

– The University of Oregon Index of Economic Indicators slipped in July after three months of consecutive gains. Initial unemployment claims rose although they continue to bounce around at low levels consistent with ongoing job growth.

– The moving average measure, which smooths out the volatility, fell to 0.10, close to average but lower than typically experienced during an economic expansion (“zero” indicates average growth over the 1990-present period). The manufacturing sector continues to contribute negatively as the sector struggles under the weight of slowing global growth and trade policy disputes.

– The household sector remains a substantial contributor to the measures; consumer spending activity remains solid across the nation.

– Core manufacturing orders for capital goods continues to hold up despite the weakness in manufacturing overall; firms appear cautious on new investment spending but have yet to make the large cutbacks normally associated with recessions.

– The difference between long and short-term interest rates remains negative; this situation has foreshadowed recessions in the past.

The degree of weakness UO Index is not consistent with a recession. At this point, the combination of measures in this report suggests continued economic expansion albeit at a slower pace of growth compared to last year.