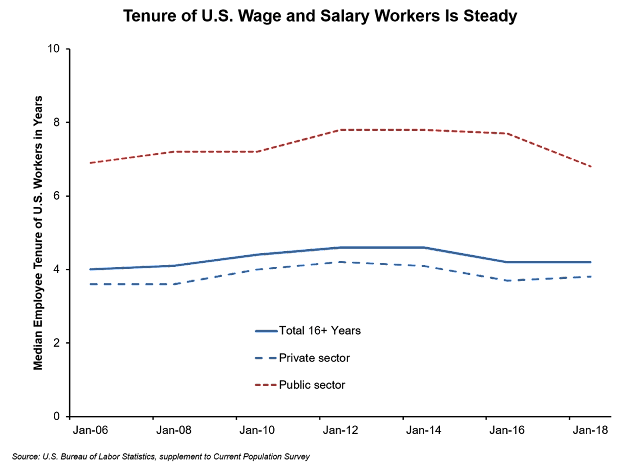 How long do workers stay in a given job? Nationally, the average employee tenure in January 2018 was 4.2 years. Data to address this question isn’t available for Oregon, but every two years the U.S. Bureau of Labor Statistics publishes this information for the nation, which results from supplemental questions in the Current Population Survey.

Data back to 2006 show little variation – job tenure has been fairly consistent over the last decade plus. A slight peak was reached in the January 2012 results, which is probably the effect of workers staying longer in the jobs they held – if they managed to hang on to them – when the nation entered the Great Recession, which lasted from late 2007 to the middle of 2009.

It may come as no surprise that management occupations have the longest tenure among occupation groups. Workers in management occupations had a median tenure with their current employer of 6.4 years in January 2018. That doesn’t mean they were necessarily a manager for the entirety of their tenure – this would include workers who began in another role and moved into management with the same employer, because the data measure a worker’s time with an employer, not their time in their current role.