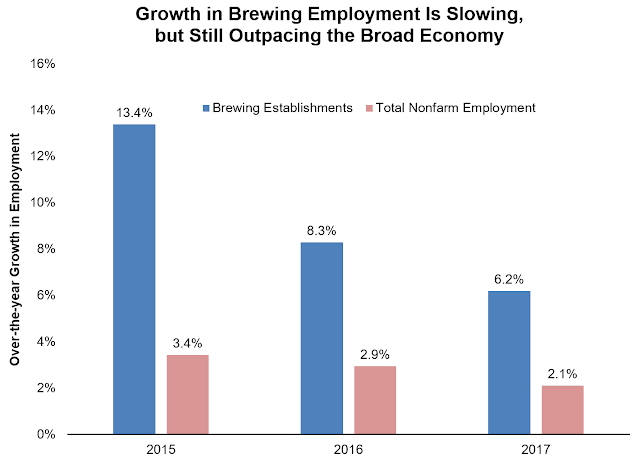 A brewing establishment is any location with onsite brewing, including large manufacturing breweries, brew pubs, and nano breweries. Those establishments with at least one covered employee and brewing on site were included in this analysis. As a result home brewers and pubs without onsite brewing were not included.

Although we continue to see new breweries and pubs being created each year, an increasing number are also closing up shop. When accounting for these closures the state only netted three new brewing establishments that reported payroll in 2017. Additionally, employment growth in the brewing industry is slowing dramatically compared with several years ago. Last year the industry expanded by 6.2 percent (+480 jobs). This is rapid growth when compared with the 2.1 percent growth in total nonfarm employment over the past year, but significantly slower than the 13.4 percent growth in breweries’ employment back in 2015.

Brewing employment continues to be dominated by pubs, which account for around 68 percent (5,560 jobs) of all brewing jobs. Not only are pubs the largest employers, but they are also the fastest growing. Over the past year pubs added around 460 jobs (+9%), while manufacturing breweries only netted 12 new jobs (+0.5%). Despite the slower employment growth, manufacturing brewing establishments are higher paying; their average wage is 45 percent higher than pubs. This isn’t too surprising as a large share of the employment in pubs is concentrated in restaurant occupations, such as waiters and waitresses; food preparation; dishwashers; and cooks.
You can read more about Oregon’s brewing industry here [3].