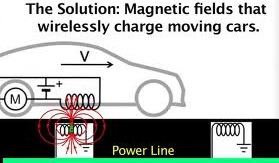 Whatever happened to tomorrow? We used to talk about a future brimming with unheard-of technologies. Just take a look at these vintage Popular Science covers to see what I mean. We used to dream big—and then something happened. The Cold War ended and the Space Age was mothballed along with the Shuttle. With these developments came an end to both to the existential incentives to innovate as well as the grand missions that inspired big dreams.   Perhaps it’s time then that we take a hard look at tomorrow once again. Thanks to the World Economic Forum’s Global Agenda Council on Emerging Technologies, we have a list of the top 10 most exciting technology trends happening right now. They have shown tremendous progress in just the past year and are nearing the point of full-scale deployment.

Cars can now be recharged wirelessly, all while they’re on the road. By placing electric cables under the roadway, you can create an electromagnetic field that’s in turn picked up by coils embedded in a car’s floorboard. Those coils in turn charge batteries housed within the car. As a result, tomorrow’s electric cars, dubbed OnLine Electric Vehicles (OLEV) could be able to ditch four-fifths of the battery capacity needed to operate a standard electric car today. A recent report from Oak Ridge National Laboratory highlights this technology’s market potential and its path to full-scale deployment.

If you a non-living material is torn or cracked, there’s no way to repair it without outside intervention—until now. Scientists have been able to develop materials that imitate the ability of living creatures to heal themselves when damaged. Reliability and efficiency could be profoundly improved with self-healing materials. A professor at Yonsei University in South Korea, for instance, was most recently able to develop a polymer spray containing microcapsules that dissolved into a solid once exposed to light. Any damage to the concrete caused the capsules to break open and seal any cracks that resulted.

Advancements in forward-osmosis, among other techniques, hold the possibility of efficiently desalinating or purifying water. With water demand expected to increase substantially in the years ahead, freshwater supplies are expected to come under terrific strain. Moreover, current methods for tapping into saltwater or wastewater are often cost-prohibitive due to their high energy demands. These new advancements in purification could cut energy consumption in half.

5. Carbon dioxide conversion and use

A strain of bio-engineered bacteria has been shown to turn CO2 exhaust into liquefied fuels or chemicals. The benefits are two-fold: not only would these bacteria be able to address carbon emission concerns, but they could help reduce the cost of today’s biofuels. Researchers have been able to contain the bacteria in “low-cost, modular solar converter systems” that can be distributed as biofuel feedstock over hundreds of acres. In fact, a team at UCLA appears to have made tremendous progress in creating a miniature refinery that converts CO2 into a liquid fuel for cars.

Gene sequencing has enabled scientists to identify the most important proteins to the human diet, and to in turn create easily-consumable supplements that target malnutrition and a range of dietary ailments.

Thanks to improved wireless and battery technologies, it has become easier than ever to develop passive sensors that monitor specific activities, such as a patient’s heart rate or the proximity of other vehicles on the road, and respond in pre-programmed ways. The military potential is also quite large, as The Economist explains.

Nanoparticles can now be engineered to deliver precise doses of drugs directly to diseased cells without affecting any of the surrounding healthy tissue. Drug treatments could become more effective with fewer side effects.

Organic polymers can be printed into functioning electronic devices in a process that’s remarkably similar to basic inkjet printing. The reductions in cost and increase in speed are potentially enormous, especially for printed solar cells.

Current nuclear reactors use only 1% of the energy in uranium, leaving the rest as highly radioactive waste. “Nuclear 2.0” technologies, such as spent-fuel recycling and liquid-metal core fast reactors, are not only much more efficient in their use of uranium but produce waste that’s far less toxic. If you want a quick guide to the past and future of nuclear technology, be sure to check out the European Commission’s primer.