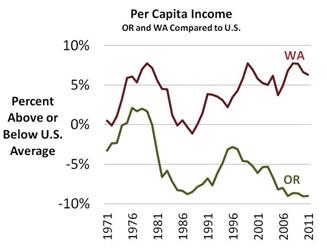 New 2011 data from the U.S. Bureau of Economic Analysis indicates that when it comes to per capita incomes, compared to the rest of the U.S., Washington and Oregon are on diverging tracks.

The per capita income of Washingtonians, at $44,294, is 6% higher than the national average.

It would not be so disturbing if the gap simply reflected a difference between two states running ahead of the national average, one more successfully than the other. But it is the result of one state going up – and other down – relative to the rest of the nation.

We believe that Oregonians need a raise.

But to earn that raise, one thing is clear:

Oregon must change its approach to become more competitive in attracting and keeping jobs, notably in manufacturing, and avoid the rising specter of increased regulatory and cost barriers.

It requires that we make job creation a priority.

That’s why, over the past few months, we have advocated unapologetically for:

Oregon withdrawing its share of water from the Columbia River in order to bolster agriculture and food processing (450,000 acre feet translates into 10,000 new jobs, $1.7 billion in additional income for Oregonians)

Each of these issues will make a huge difference for Oregon – helping us close the income gap with Washington and the rest of the country.

Here’s a more detailed look at the new income data for Oregon and Washington: