From NPRs Planet Money a fascinating graph showing percentage of income spent on consumption categories in 1949 and 2011: 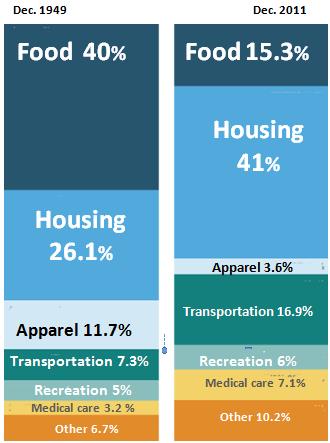 What struck me immediately, of course, was the decline in the percentage spent on food. This is a function of both our increasing wealth and the massive productivity gains in agriculture. We spend more on homes and cars and health care.

But I expected a bigger jump in recreation as leisure is a big part of what we consume, but I suppose we would see that in the hours worked which is not a part of this.