One-Third of Nonmetro Counties Had Losses
— Despite Trends, Oregon is Still a Rural State
By Oregon Employment Department [1]

Over our country’s history, long-term trends have driven the bulk of the population into metro areas. Two centuries ago, 93 percent of Americans lived in rural parts of America. By 2000, that number had dropped to 21 percent. Oregon has not been an exception to this long-standing trend as the latest 2010 Census data show. This article looks at decennial population growth between Oregon counties within metropolitan statistical areas (MSAs) and counties outside MSAs.

Out of the 410,000 Oregonians added over the decade, about 361,000 of them live in metro counties. Washington County (part of the Portland MSA) added the most residents, with over 84,000 more residents (19% growth). Deschutes County (the only county in the Bend MSA) grew the fastest with a growth rate of 37 percent (Table 1). In all, Oregon’s metro counties grew by almost 15 percent. Oregon’s nonmetro counties in total, had a below-average growth rate of 6 percent. 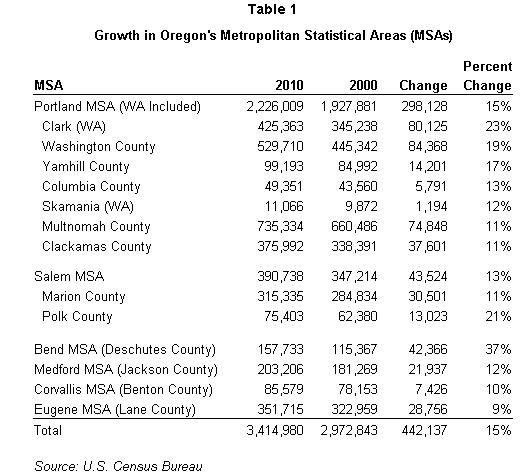 One-Third of Nonmetro Counties Had Losses

While no metro county had population losses during the 2000 to 2010 period, eight of the 25 nonmetro counties had losses. The majority of those losses came from eastern counties that were already sparsely populated (Figure 1). Baker County had the largest loss with 600 fewer people in 2010 than in 2000. Sherman County had the highest percent loss at 9 percent – a decline of 170 people. 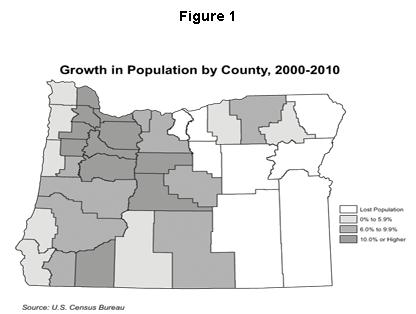 Despite Trends, Oregon is Still a Rural State