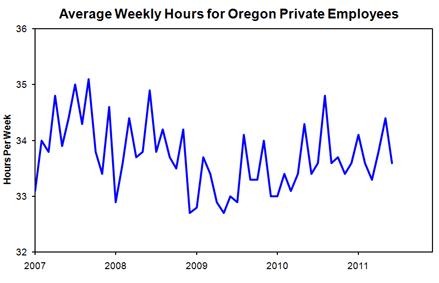 In June, the average workweek for Oregon’s private-sector nonfarm payroll workers dropped to 33.6 hours from 34.4 hours in May. The June figure was slightly above the June 2010 average of 33.4 hours, and up from 33.0 in June 2009. Thus, the workweek has risen over the course of the past two years of economic expansion.

Looking back to June 2008 when Oregon’s economy was slowly contracting, the workweek was 34.9 hours. And before the recession started, in June 2007, the workweek was 34.4 hours. Changes of only an hour or two in the average workweek might not seem like much, but add up to many hours when all of Oregon’s 1,336,900 private payroll workers are considered.