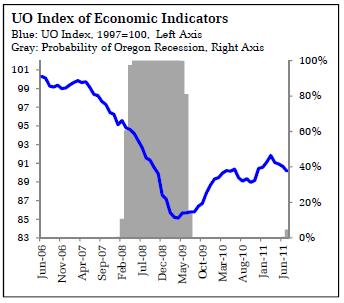 • Consumer confidence (smoothed with a five month moving average) fell in July, suggesting caution on the part of households. Still, July figures for personal consumption expenditures reveal a solid gain in the wake of a decline in the second quarter.

• The recovery that began in the second half of 2009 slowed to a crawl in the first half of this year, leaving both Oregon and the nation with historically high unemployment. While incoming data remain consistent with disappointingly slow growth rather than recession, the expansion is clearly fragile at this juncture.

For some recent thoughts on the Federal Reserve, please see my interview on Reuters TV:

Special thanks to our presenting sponsor, KeyBank. Additional sponsors who help make this event possible include Providence, The Portland Business Journal, the Portland Business Alliance, the Port of Portland, Ashforth Pacific and Collier’s International. We also received support from the US Delegation of the European Commission