Environmental permitting times and predictability are critical elements in a business’s decision to expand or locate in Oregon. Often, the ability to predict how long it will take to get a permit is almost as important as what will be in it. Few issues are as important to job creation. A recent report shows DEQ’s permitting times, in at least one case, eroding over the years and generally falling below self-established goals. Reasons cited include continued general fund reductions leading to staff cuts, resource re-allocation due to litigation, and increased permit complexity due to litigation, new requirements, and the accommodation of various groups in the permit writing process.

Many outside the agency expect to see it worsen for all the aforementioned reasons compounded by new rigorous standards and procedures adopted by the agency. Permitting funding varies widely by program, ranging from 100% fee based to a mix of general fund, federal money, and fees. The agency receives about 0.6% of the total general fund, depending on how such numbers are derived.

The data, contained in a legislative report Annual Performance Progress Report (APPR) for Fiscal Year (2010-2011), detail out a set of performance criteria and the agency’s progress in meeting self-imposed goals. The report is developed for, and presented to the Legislative Ways & Means Committee as part of the agency’s budget review. The data is for 2009 and before.

The problem is most severe in water discharge permitting. As a result, the percent of water discharge permits being issued by the “target” date, which held steady from 2000 through 2007, has dropped dramatically. Although the program has benefited from a series of fee increases, the program has experienced general fund cuts and staff reductions. Another factor is the endless stream of litigation from environmental advocacy groups which has forced a diversion of resource and directly or indirectly spawned programmatic changes greatly increasing permitting complexity; the recent adoption of the nation’s most rigorous state water quality standards and new stormwater runoff permitting requirements being such an example. 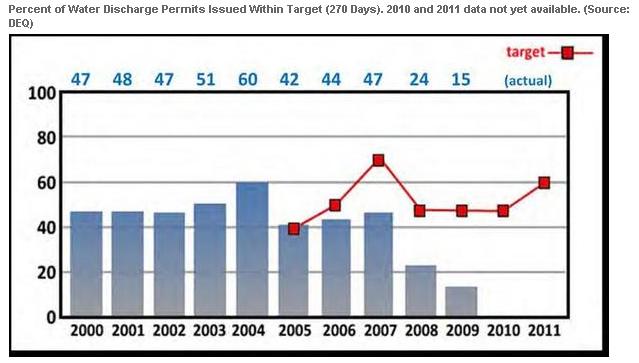 On the air permitting side, ACDP permit (the most common type) issuance improved dramatically after a 2000/2001 program renovation but dropped again in 2006. In 2009, the most recent year reported, almost 80% of the permits are issued within the target window. The agency cites the refocusing of resources on assistance for the gap between actual and goal. (The 2008 jump is a partial artifact stemming from the conversion of a set of sources to a “general,” e.g., rule, permit.) 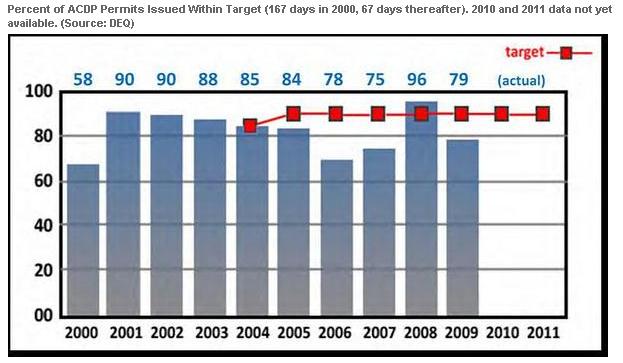 On the other hand, for Title V Permits (major air facilities) performance has gradually improved, helped by a fee increase. Still, resolving enforcement actions prior to permit issuance and an increased agency response to third party interventions is resulting in permit re-writing, expansion of requirements, and slowing issuance. (“DEQ has responded by increasing the amount of time spent engaging the public and addressing their concerns regarding specific permits.”) The program is 100% supported by permit payer fees; no general fund money is allocated. (The 2008 value is artificially high due to a series of very similar permit modifications coming at one time.) 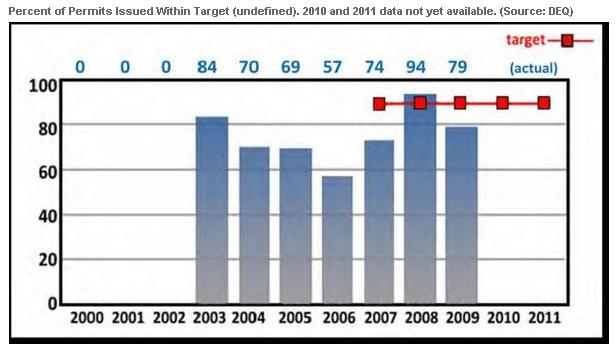 Percent of Permits Issued Within Target (undefined). 2010 and 2011 data not yet available. (Source: DEQ)