Brief history of gold price: Gold had sold for $35 an ounce, then shot up to $675 during the last bubble, peaking in January 1980. (I’m using monthly averages throughout this article.) That’s cool, buying at $25 and selling at $675. However, as gold was shooting up, plenty of new “investors” were buying, and there were plenty of people who got in on the boom at above $600. 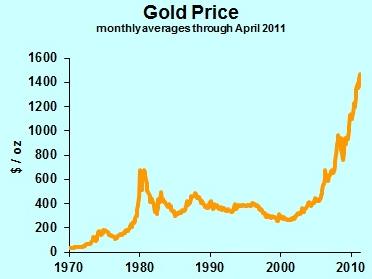 Within two and a half years, gold had lost half its value. It finally hit its trough in 1999, 19 years after the peak, at $257 an ounce. That would have been a good time to buy, but who would have thought? Gold had slumped for nearly two decades. It appeared to be a stupid time to buy.

Now we’re up over $1500 an ounce (I’m writing on April 28, 2011). Isn’t that great? Let’s stay with the history for a bit. Let’s go back and adjust that 1980 peak for inflation. In terms of dollars with 2010 purchasing power, that peak was $1,892 per ounce. Another 23 percent upward and those old investors will have recovered all their purchasing power. Whoop de do. Just for comparison, if you had bought stocks in January 1980, you would have a total inflation-adjusted return of 316 percent. But we were headed into a recession in 1980, with fed funds at 13.8 percent, mortgages at 12.8 percent, and everyone knew it was an awful time to buy stock.

Demand for Gold: The big surge in gold demand recently has been speculative, but first let’s cover usage. Jewelry is a major use, and the expanding economy in the emerging world is stimulating demand. There’s plenty of industrial use of gold. Your computer has gold connections, but not enough to melt down your box and turn a profit. However, we have a lot more electronic stuff than every before, and industrial usage is rising. Gold is also used in dentistry, and I would expect rising incomes in the third world to stimulate demand for gold fillings. There are other industrial uses which should rise with the world economy.

The speculative demand for gold has historically been fueled by inflation fears. The tremendous monetary stimulus of the Federal Reserve warrants some concern. However, here in the United States we have so much unused productive capacity that I can’t see inflation emerging anytime soon. Further, one would want to look at worldwide monetary policy, which is not nearly as stimulative as U.S. policy.

Certainly some prices are rising rapidly, but they are primarily commodities (such as oil). No one seems to notice that plenty of other prices are falling. Anyone buy a computer lately? The price changes are predominantly changes in relative prices, meaning the price of one good relative to other goods. They get translated into general inflation only if the central banks of the world print more money. (Here in the United States, the money supply has risen less than five percent in the past 12 months.)

The bottom line is that I think the speculative demand for gold is fickle, and could quickly turn to selling. But that depends on …

Supply of Gold: In the short-run, it’s hard to increase gold production. Mines are capital intensive businesses. The existing mines may be able to run double shifts and increase output, but adding capacity takes time. However, high prices for gold motivate mining companies to ramp up production. The first key thought is that we have a large number of gold mines out there. A typical mine has a variety of mineral combinations in different locations. The mining geologists know that the high-concentration (equal low cost production) ore is over here, while the low-concentration ore (high production cost) is over there. They will sometimes shift production back and forth to keep their workers fully employed. At times like these, though, look for every operating mine to produce at maximum capacity.

In addition to the mines currently operating, there are plenty of mines that shut down in past years when prices were too low for profitability. Nothing like a huge run-up in price to get old mines back in operation. Old mines being reopened was pointed out in this New York Times article.

In addition, prospectors are staking out claims to new fields, as the Wall Street Journal reported. Supply will increase substantially, but with a long time lag. What happened after that 1980 price spike? It took several years for production to increase, and then it zoomed. And stayed high even as prices were plummeting. (Statistics here.) That’s what happens in a capital intensive business. A company says, “At $600 an ounce we can make a lot of money. We invest a bazillion dollars upfront, and then we can mine gold for only $200 an ounce.” By the time the mine is operating, gold is down to $300 an ounce. It turns out the bazillion dollars of upfront expense are not justified by the production economics, but the mine continues to operate because it’s covering its variable costs. (This might be a good time to review the microeconomics of fixed costs and variable costs.) The bottom line: once production increases, it stays high for years to come.

Forecast of Gold Prices: It’s hard to predict exactly when the price of gold will start to decline, but it will come down. And when it turns, it is likely to turn very sharply down, then remain depressed for at least a decade.