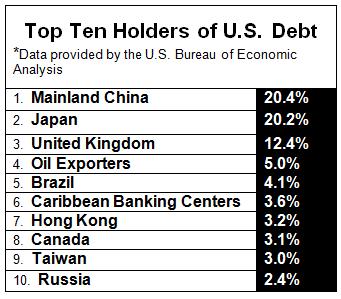 The United States has not seen a balanced budget since 2001, leading to increasing national debt. Although private banks in the U.S. hold the majority of the country’s debt, over 52% according to MSNBC, the Treasury Department and the Federal Reserve Board estimate that foreign governments hold 4.4 trillion of the country’s $14 trillion debt in Treasury securities. The U.S. Bureau of Economic Analysis estimates that Mainland China owns $891.6 billion of the U.S.’s debt. Even Russia owns $106.2 billion.

The United States auctions off treasury securities every three months. This length of time gives the Treasure enough time to figure out how much money it will need to pay off the old debt and cover the cost of increased spending. Buyers have the option to make a competitive bid at the auction, which allows the buyer to ask for a specific rate, or a non-competitive bid, in which the buyer agrees to accept the average rate of other winning bids.