Throughout the state, average hourly earnings are rising in the private sector. Between November and January, Oregon’s hourly earnings rose from $21.55 to $22.03. For Portland, the increase over that two-month period was from $23.61 to $24.15. Both of these large areas saw substantial increases in average wages over that period. 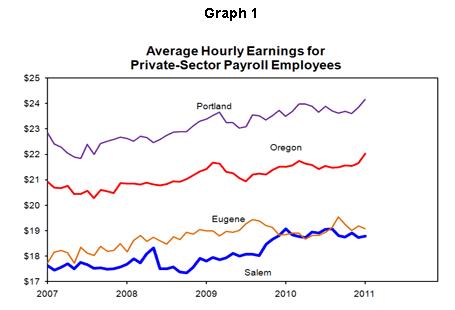 Graph 2 looks at the same data, but using a 12-month moving average. There are several reason for using this moving average. First, it alleviates seasonality issues where certain months of the year usually have higher average wages. Second, it shows longer-term trends by masking monthly volatility. Thirdly, it allows more lines to be easily seen on one chart, thus allowing the addition of the three smaller metro areas.

This graph shows Portland and Oregon climbing at about the same rate, likely close to the rate of consumer price inflation. It also shows the relative travails of the Bend metro area, which has been hit hard over the past few years by the housing bust. Less clear is why this measure of wage performance has been growing rapidly over the last two years in Medford.