This analysis is based on data for every UI benefit recipient who also received a 1099g from the Oregon Employment Department. The form 1099g is a tax record, like a W2 for wages which shows how much was paid to the individual during the calendar year. This file is used because every individual is represented only once.

The unemployment insurance program has numerous reports that come out weekly, monthly, quarterly and annually. One of the monthly reports, the ETA 203, is on the demographics of claimants on regular benefits who were unemployed during the week of the 12th of the month. Regular benefits are the benefits available to all covered employees during all periods. Looking at regular claim activity allows you to compare claim trends during periods when there are and are not extension programs. Data from this report is used to underscore some of the trends observed in comparisons between the 1099g data. 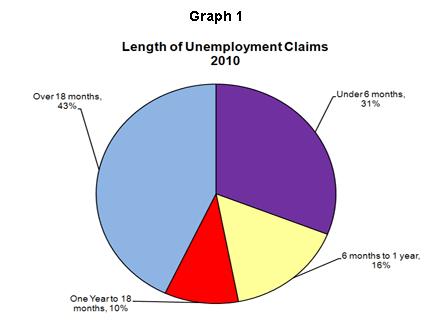 The level of UI recipients is historically high due in part to the 73 weeks of extension benefits available to most claimants. During non-recessionary years, most claimants qualify for only 26 weeks of benefits. Regular claim levels were also high, indicating that 2010 saw many newly unemployed as well as the long-term unemployed. By the end of February 2011, 31 percent of claimants paid a benefit in 2010 had been compensated for six or fewer months on their claim, while 69 percent received benefits for longer periods. By the end of February 2011, nearly 30,000 people had exhausted all of their benefits.

In 2010, a record number of claimants – 366,618 people – received over 2.7 billion dollars in unemployment insurance benefits in Oregon. This was slightly higher than the number who received benefits in 2009.

According to the Current Population Survey, men make up between 52 percent and 54 percent of the Oregon labor force. In contrast, 62 percent of UI recipients in 2010 were male. The percentage of male recipients rose from 2006 through 2009, and then dropped from 64 percent in 2009 to 62 percent in 2010. Men are over represented as UI benefit recipients because they are more likely to work in industries which are seasonal, such as construction, or at a manufacturing plant that is shut down for maintenance.

The growth in the share of men receiving benefits reflects the deep employment cuts in these male-dominated industries early in the recession. In 2009, the share of recipients whose last major employment was in the construction or manufacturing industry was 15 percent and 23 percent respectively. These percentages dropped to near pre-recessionary shares of 14 percent and 18 percent in 2010. This trend can also be seen in data from the ETA 203 report. Graph 2 shows the trends in unemployed from these industries from 2001 through 2010. At the same time two female-dominated industries – health care and social assistance, and accommodation and food services – saw shares grow from 6 percent and 7 percent in 2009 to 8 percent and 7 percent, which are also closer to pre-recessionary levels.

The majority of claimants have a high school diploma or less. Though the industries that have been more heavily hit during this recession have been those that rely on workers with on-the-job training rather than workers with higher education, the educational attainment of the unemployed has not changed dramatically.

Nearly 10 percent of the 2010 claimants were veterans. Baker, Columbia, and Linn counties had 13 percent or more of their claimants report that they were veterans. Most veterans are eligible for additional job search services. 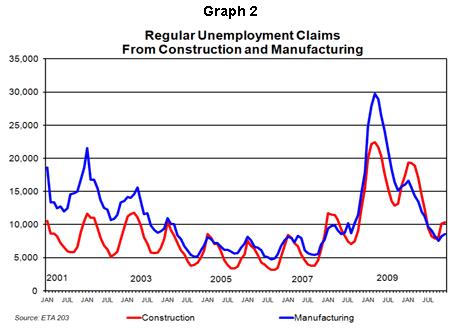 With recent anemic job growth, unemployment insurance claims have remained at record levels. In 2010, six out of ten UI claimants were male, attesting to the hard hit male-dominated industries took during the recession. The share of claimants ages 60 and over also increased in recent years, and these older claimants made up over one-tenth of UI recipients in 2010.