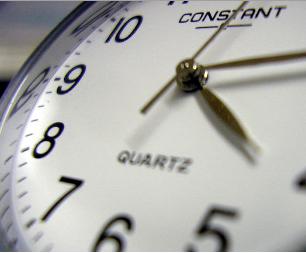 CHICAGO, February 23, 2011 – Since the recession began, more workers are starting their work day on time. A new CareerBuilder survey reveals that 15 percent of workers said they arrive late to work once a week or more, down from 16 percent in 2009 and 20 percent in 2008. This national survey was conducted among 2,482 U.S. employers and 3,910 U.S. employees between November 15 and December 2, 2010.

Workers shared a variety of reasons for being tardy, with the top excuse being traffic-related (30 percent), followed by lack of sleep (19 percent). Nine percent blamed the bad weather for their tardiness, while eight percent indicated a delay in getting their kids to daycare or school. Other common reasons included public transportation, wardrobe issues or dealing with pets.

“Whether it is a result of fear associated with the economy or just a shift in attitude, workers over the last few years are doing a better job of managing their schedules and getting into the office at the designated time,” said Rosemary Haefner, vice president of human resources for CareerBuilder. “While workers will sometimes be late due to circumstances out of their control, they need to be aware of their companies’ tardiness policies. Regardless of the reason, workers who are running late should always be honest with their managers.”

While some employers are more lenient with worker tardiness, others have stricter policies. One-third (32 percent) of employers said they have terminated an employee for being late. Here are the top ten:

1. Employee claimed they weren’t late … the company clock was wrong.

2. Employee claimed is car was inhabited by a hive of bees and he couldn’t use the car for two hours until bees left.

3. Employee claimed their cat attacked them.

4. Employee claimed it was a delay with public transportation and produced a note signed by “The Bus Driver.”

5. Employee claimed his Botox appointment took longer than he expected.

6. Employee claimed his hair was hurting his head.

7. Employee claimed they did not get any sleep because their boyfriend’s wife threw them out of the house.

8. Employee claimed they knew they were already going to be late, so they figured they’d go ahead and stop to get donuts for everyone.

9. Employee claimed their Karma was not in sync that day.

10. Employee claimed they got hurt taking a fork out of the dishwasher.

Survey Methodology
This survey was conducted online within the U.S. by Harris Interactive© on behalf of CareerBuilder.com among 2,482 U.S. employers and 3,910 U.S. employees (employed full-time; not self-employed; non-government) ages 18 and over between November 15 and December 2, 2010 (percentages for some questions are based on a subset, based on their responses to certain questions). With pure probability samples of 2,482 and 3,910 one could say with a 95 percent probability that the overall results have a sampling error of +/- 1.97 and +/- 1.57 percentage points, respectively. Sampling error for data from sub-samples is higher and varies.

About CareerBuilder® — CareerBuilder is the global leader in human capital solutions, helping companies target and attract their most important asset – their people. Its online career site, CareerBuilder.com®, is the largest in the United States with more than 23 million unique visitors, 1 million jobs and 32 million resumes. CareerBuilder works with the world’s top employers, providing resources for everything from employment branding and data analysis. More than 9,000 websites, including 140 newspapers and broadband portals such as MSN and AOL, feature CareerBuilder’s proprietary job search technology on their career sites. Owned by Gannett Co., Inc. (NYSE:GCI), Tribune Company, The McClatchy Company (NYSE:MNI) and Microsoft Corp. (Nasdaq: MSFT), CareerBuilder and its subsidiaries operate in the United States, Europe, Canada and Asia. For more information, visit www.careerbuilder.com.