The Office of Economic Analysis blog [3] has a nice picture that does a good job describing the torpedo they good ship Oregon took to her hull. 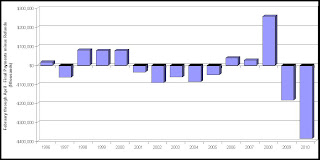 What is going on?

…preliminary numbers show that the biggest culprit was capital gains. Following a 60 percent decline in capital gains income from the 2007 tax year to the 2008 tax year, we were expecting an additional 10 percent decline for the 2009 tax year. This was in line with what many other states were projecting (5 percent to -20 percent) based on an informal survey conducted early last winter. Unfortunately, preliminary estimates show that capital gains income likely dropped at least another 50 percent for the 2009 tax year. Going forward we believe that we will see an uptick in capital gains income, but carry forward losses and low levels of business transactions will limit growth.

Which brings me to another topic. Polictical football is being made of the decision not to call a special session and institute a 9% across-the-board cut. But, of course, as OPBs Chris Lehman reported [5] lots of agencies only rely partly on general fund monies.  In fact K-12 education makes up more than 40% of general fund spending thanks to Measure 5.  Higher ed. another 10%. Mandated Medicaid about another 12%.  After that the only other significant portion is corrections and we see what a 9% cut will do there [6].   Given the dire state of K-12 in particular it seems difficult to understand why we wouldn’t want to try and protect it.  But the reality of the numbers is stark: there just isn’t a way to protect K-12 without totally gutting other state programs.  So while I like the idea of being more nuanced about cuts, there just aren’t many degrees of freedom here.

Which of course brings me back to kicker reform and a rainy-day fund.  Yes, it does not fix long run trends that Tim Duy has very clearly explained [7], but a substantial rainy-day fund would allow us to avoid these types of draconian cuts to basic services in recessions.