The numbers for the third quarter look nice, or what passes for nice these days.  GDP rose smartly, pretty much confirming the general view that the recession is over (more on that below). 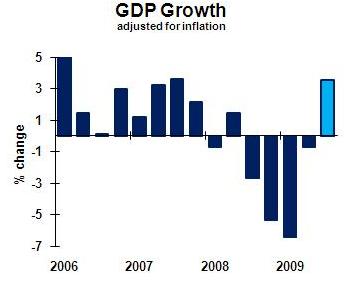 The details surprised me a bit, even though the total growth was in the ballpark of my forecast (4.2 percent, compared to 3.5 percent growth actual).  Consumer spending was stronger than I had expected, even with Cash for Clunkers.  That may not be sustained.  However, inventories contracted much more than I had expected.  We are definitely going to get an inventory turnaround soon, and that will add quite a bit of strength to the economy.

I’ll update my forecast and share it with you tomorrow.

Now about the end of the recession.  We economists define the recession as the period when the economy is going downhill.  That period is over.  However, we have not recovered all the ground that we lost.  Think of it this way: we fell down a 10-foot hole, we hit bottom and took one step upward.  We are out of recession, but we’re still nine feet down a ten-foot hole.